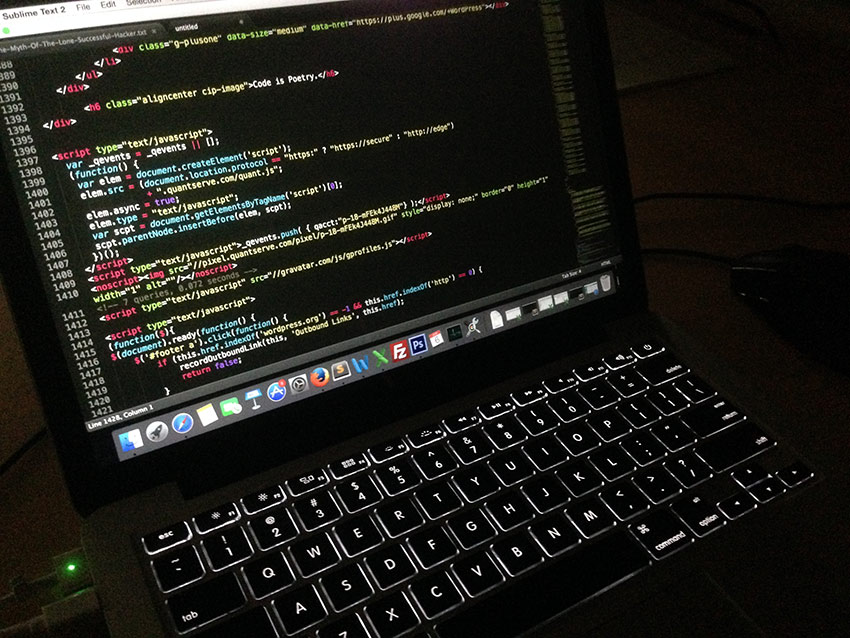 Dudes, well certain nerdy dudes, love to romanticize about secretly coding throughout the night, and becoming the next soloprenuer success story. I’ve been there. I know plenty of others who have too…

I have a friend that’s incredibly brilliant. Self taught developer. He’s been creating all kinds of amazing “web stuff” since the early 2000s. He always has ideas for businesses and startups. But he suffers from one gnarly affliction:

He told me the other day, “I’m addicted to procrastinating. Seriously. I have an addiction.”

At first, I was like “WTF are you talking about? You can’t have an addiction to procrastination.” But as he delved further into his issues, I found out that he certainly had a big problem.

He just can’t stick with something and knock out his goals. He’d rather stay in bed all day.

I had the same problem back in 2010. I was running a consulting shop all by myself. And I would spend hours in a 2-room office all by my lonesome. It may seem not that strange at first, but it quickly becomes something like solitary confinement. It starts to really get depressing after a few months. The good news was I lost a bunch of weight, but my life was just…weird. That’s actually a big part of the reason why I joined KISSmetrics.

But back to the evolutionary point I was making.

Humans are social animals. We evolved to work in tribes and now teams. That’s how we solve problems. We do it together.

When we were trying to chase down wild game it would get tricky. The animals we would hunt would dart off in all directions and we would spend hours trying to chase them down with spears. But as the tribe started working together, we would make plans to split up and chase game into our “surprise gang”. And the surprise trap would work! And we would feast that night. We learned teamwork.

The San use a slightly different hunting technique. But they’re still at it to this day!

If you’re in a room with a few other people, chances are you’re not going to lie around on the floor and tell people you can’t get anything done because you’re addicted to procrastinating. You’re going to probably start working together to get shit done. Otherwise: “That fool doesn’t get any organ meat tonight!”

2. The Beauty of People and THEIR time constraints

I love constraints. They give you boundaries. They help you scope. They set limits.

It makes it SO much easier to work within constraints, than to have infinite possibilities in all directions :).

And the beauty of team sessions is that your time is finite. You see, when you’re working by yourself, and you have no family responsibilities or other time constraints, your mind tricks you into thinking you have all the time in the world to get something done. Usually that means, “Well maybe at 2am I’ll really get cranking like back in college..”

And that’s a curse.

When you work with people during specified times, you can’t mess around. You just have to get what you need done during that time. That kills procrastination right there. And the more beautiful part of this is that it GIVES you time to NOT WORK. When you’re done with your team session, if designed right, you have the remaining part of the day to recharge, spend time with friends and family and DO LIFE.

Remember, we were meant to work in teams. Conversations, getting ideas flowing, bouncing ideas back and forth, asking questions to each other. That’s where growth happens. That’s how problems get solved. It’s a neural network. It’s a bigger computer. It’s a faster algorithm.

Yep, you and your team are a distributed computing network. And you can choose to work remotely and use chat, but perhaps there is something else at play that makes working in person even more powerful. Maybe it’s the positive psychology of facial expressions. Or maybe hormones are released into the air when people get excited about ideas. We’re barely learning how humans work, so maybe evolution has built in all kind of weird triggers that only happen in person.

So this is my rant for the day

I really wrote this for my friend. I want him to succeed. I THINK I might be cracking the code here. At least for this individual. Go get ’em!

Oh yeah! One last thing. If you’re having this problem and you’re a soloprenuer, then try hiring local people to work with you part time. At least a few hours a day, a few days a week. Think of it as investing in your business. You’re implementing human capital to get ahead faster and bringing in an internal social component to your business.