I wrote this quickly. I wanted to get the idea out there and polish it up later. It’s about life and death.

Unfortunately, many of the first drones were made for military purposes. Hundreds of millions of dollars were poured into research and development for drone-based military projects. Now that number is in the billions.

Not to save lives. But to kill people.

Think about that. There are billions of dollars available to develop technologies designed to kill humans.

I gotta ask: why can’t we spend billions on technology programs designed to save lives? I’m really scratching my head on that one…

Aren’t we humans awesome? With all our creativity and industrious energy, the first thing we think of is: How can we use this technology to kill people?

There have been some recent developments to use drones to help people in remote places. By asking a question on Twitter, I found out about Zipline (which strangely enough doesn’t link to a website from their Twitter account).

There’s no better use case for this technology right now than in Yemen.

Tell me that it wouldn’t be a good idea for the UN or UNICEF to team up with tech companies to fly food and water to the worst war-torn regions of the globe.

For example, in Yemen people are cut off from food and water. 50,000 people have died of famine since 2015. Seems like we should do everything in our power to help these people.

Now companies like Zipline have developed drones that can fly large payloads hundreds of miles. For some reason, I thought up with another solution. 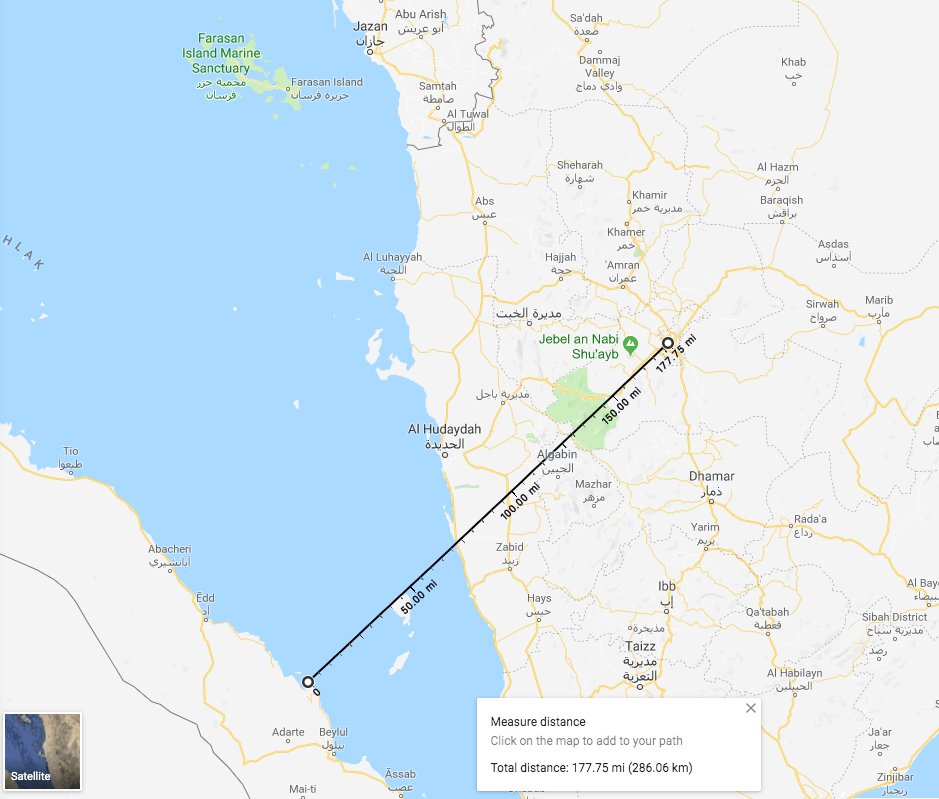 The Phantom 3 can apparently fly 50 mph. That means the trip from Eritrea to Sanaa Yemen is 3.5 hours one way. If the drone leaves at 9 am and drops off supplies by 12:30 pm, it can return by 4 pm. Thanks to the region and latitude, there’s plenty of sunlight for this journey. I suppose the drones could be programmed to land if it’s too cloudly and continue on the next day or when weather permits.

Now the question is: can you make a solar power drone?

This Quora article goes over the power requirements of a Phantom drone.

So can a solar panel power this drone? And how big would it have to be?

Imagine a 19″ x 19″ solar panel with four rotors coming out of each corner. And cargo bay underneath.

The payload of the Phantom 3 is 2.5 lbs. But that’s the max payload.

With that said, I definitely think food bars would be an easy payload for this type of mission. Water would be more difficult, but not impossible. 8oz bottle of water is 1/2 lb.

So imagine a swarm of small drones carrying small payloads of food and water, doing daily missions, dropping 10,000 mini payloads a day. It seems like a worthy cause, worth the effort and the funding SHOULD be there for it. I know of plenty of lame B2B tech startups that get a few million bucks for software the world really doesn’t need. The world needs this technology.

2 thoughts on “Can Drones Save Yemen? Perhaps DroneTech Can Partner with the UN or Unicef To Save Lives.”