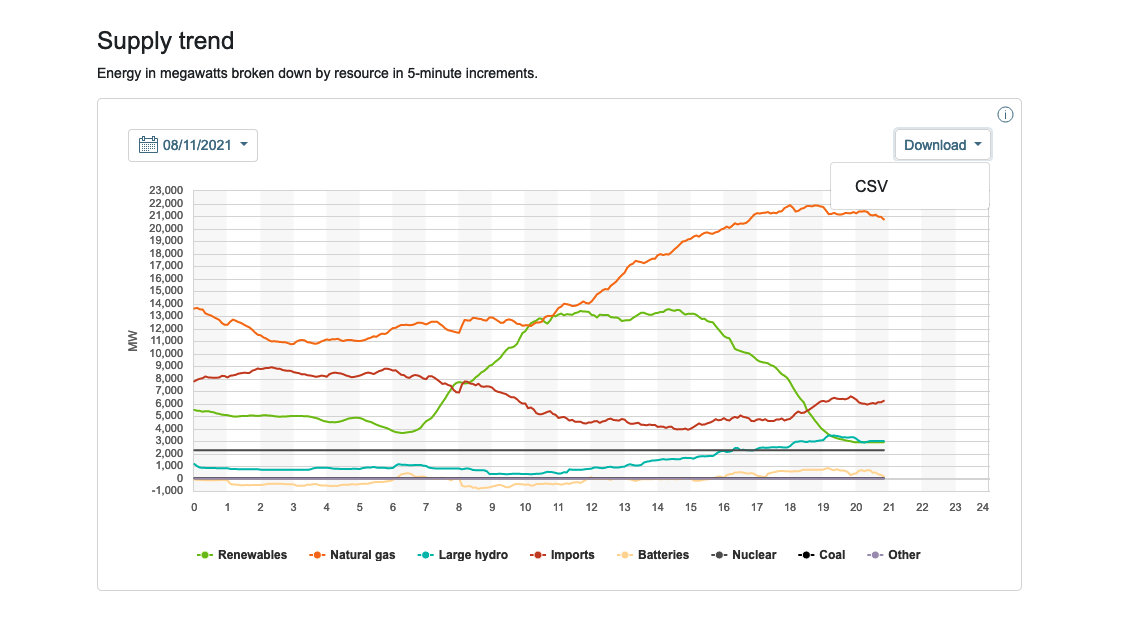 Here are some of the things I noticed:

1. Natural gas is by far still the dominant source of energy (the orange line) for California.

2. Renewables delivers a good chunk, but nowhere near enough.

3. If we’re going to switch to everyone driving EVs (electric powered vehicles), I’ve heard we’ll need to triple overall electricity production. Which means with the current amount of renewables in place, that orange line (natural gas) is going to jump way up!

4. We’re doing terrible in terms of batteries (energy storage). At least that’s what I get from this graph.

5. It’s been ten years since we started this big solar push in California. Renewables aren’t winning yet. Today, only for a short moment, did renewables overtake natural gas.

1. More nuclear power plants. Nuclear power doesn’t produce CO2 or greenhouse gases while they produce electricity. The carbon footprint comes from building the plant and the people driving to it every day. It also provides stable power 24 hours a day. Important: There’s been quite a bit of work done on new nuclear technologies that are much safer and more efficient than the current nuclear technology that’s being used.

2. Perhaps iron-air batteries. I think they are cheaper and more sustainable compared to lithium ion batteries. If we’re going to scale up renewables, then we need a way to store that energy. We also want that energy storage system to be manufactured with sustainability in mind. Iron-air batteries might be a great fit for that need.

3. Tidal energy generation COULD HELP somewhat. There’s a lot of stuff coming out of Scotland dealing with that technology. But it’s all in very early stages. Not sure how much power you can get out of it.

Conclusion. We’re going to need nukes to do the job. Or LOTS of geothermal plants.